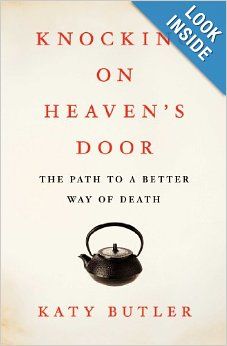 Knocking on Heaven’s Door: The Path to a Better Way of Death

Recommendation of Knocking on Heaven’s Door: The Path to a Better Way of Death

Few people in this world can write about such a commonly experienced event—a “bad death”—of a parent as poignantly, lovingly and as wisely as Ms. Butler has in her new book.  Erudition and caring are shown from beginning to end of this timely and important book. There are lessons in this book literally for everyone—old, young, parent, child, spouse, medical professionals at all levels, particularly physicians and especially cardiac specialists!

Ms. Butler starts where most of us do—“Until my parents entered their late seventies, [my remote siblings and I] assumed that they would have robust, vigorous old ages, capped by some brief and vaguely imagined final illness. In my personal fantasy, death would meet my father suddenly a happy afternoon in my mother’s garden, blowing leaves into piles with a rented leaf blower.” Instead of a “Solyent Green-like” ending, going “gently into that good night,” we would all prefer, Ms. Butler’s father suffered a debilitating stroke, which propelled her Dad, her mother and Ms Butler (though not her two brothers, because as is far too often the case, those left to do the heavy lifting for ailing and aging parents are daughters not sons) into the dark abyss—the so-called “black days.” That abyss is described throughout so palpably that I began to relive my own parents’ deaths all over gain from an all-too-common lens experienced unwillingly by so many.

4OurElders is primarily about long-term care housing choices and this book has nothing to do with that subject; however, there are many things about long-term care that can be gleaned from this book.  Like, the utter uselessness of some doctors and lawyers who get involved in end-of-life decisions; the difference between “slow medicine” ( chosen by Ms. Butler’s  Mother when she faced her own death within two years of her Father’s death and highly desirable for many, including me, entailing patient-centeredness in all decisions, unrushed decisions, care vs. cure) and “fast medicine” (imposed on Ms. Butler’s father and desired by some, and okay for me when a cure is really achievable, characterized by a barrage of rapidly prescribed tests and treatments with little regard to their human costs—fixing rather than healing); how to make critical choices when faced with hard decisions for a loved one or ourselves; the difference between having medical rights (like the deactivation of her father’s pacemaker) and the inability to exercise those rights (because neither her or her mother could find a doctor willing to implement such a  choice); what it is like when the “golden years” turn into interminable “years of lead” that end up, as in her parents’ case, “devastating two lives;” and how to bring something good out of all the bad.  Ms. Butler did find the good, discovering that, despite all the hardships she experienced during her father’s final years, her father’s stroke actually brought them so much closer together through things like their love letters to each other.  Near the end, she recognized that, while his death would be better for her father and mother, it would not be and was not better for her.  Hard but beautiful stuff indeed!

Finally, the book reveals a timely lesson that progress does not always come without pain. The unbelievable (financial) story of the pacemaker--the true antagonist of her book—is eruditely told with the backdrop of enactment of Medicare legislation, which had incredibly bad unintended consequences experienced throughout its early implementation in the mid-to-late 1960s. From this retelling, maybe just maybe this history lesson can teach us that the rollout of the Affordable Care Act (the largest and most far-reaching medical-related legislation since Medicare) may not be as bad as the much-publicized computer failings seem to suggest. Maybe the website blunders are NOT something we will be unable to recover from; maybe, with a little good faith and determination, we can make it better for all of us in the near future and for the long term. Maybe a little “slow medicine” in this context would be advisable for political pundits, legislators and other negativists who see nothing but a “falling sky” in a floundering website.

Again, we salute Ms. Butler for this wonderful book.  Do NOT miss her chapters at the end of the book, outlining a “map through the labyrinth” of death and dying, in which she offers excellent advice on what she calls the “new art of dying.”